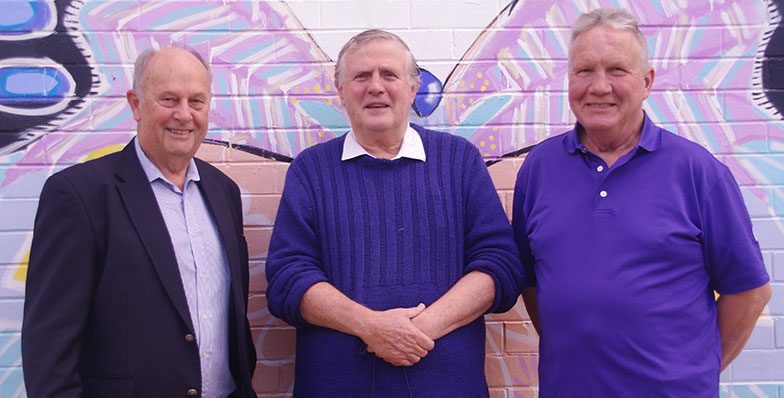 After sitting down with Pekka Korhonen (far right in image) in May this year, we were blessed to hear the marvellous story of Pekka’s recovery from years of alcohol abuse and how far he has come. This recovery yields almost two years of abstinence from his problematic alcohol abuse and can be largely attributed to the insertion of a top-up Naltrexone treatment. This procedure was performed by Dr George O’Neil in October 2018, at the Fresh Start Recovery Programme Clinic in Subiaco.

Pekka originally came from Finland and grew up in Mount Gambier, South Australia, in the 1960s. When asked what were some of the factors that led to his excessive drinking, he responded, “Drinking makes it easier to talk to the girls and makes it easier at parties.”  This unfortunately is a familiar theme for many Australians and can lead to the destructive path of alcohol abuse.

Pekka’s alcohol use became so problematic that he would drink alone for days on end, in an empty house owned by his brother. His alcohol use spiralled to the point that he was consuming two to three bottles of straight Vodka a day!

Pekka has tried various other ‘rehabs’ such as, a private rehab in Melbourne, Harry Hunters and the Salvation Army. Unfortunately, none of them were able to help Pekka on a long term basis. Ultimately, it was the insertion of a Naltrexone treatment, together with his desire for sobriety that has given Pekka the quality of life he now enjoys today.

Since Pekka’s top-up Naltrexone treatment in October 2018, he has completely abstained from alcohol use and has been on the straight and narrow. Pekka feels a lot calmer, lost the desire to drink and has told me that he got over it and was tired of abusing himself.

Post treatment, Pekka returned to work with a renewed lease on life and has been able to better handle the challenges that everyday life can throw at you. A lot of these challenges can lead to people drinking to excess. As in Pekka’s prior situation, stress was the trigger for alcohol consumption. “Before, if I was stressed out to the max over a job, I would think bugger this I’m going to have a drink. Now, I can handle things better … before I turned to the drink.”

Pekka’s relationship with his family has also improved and trust has been renewed, his sons would worry when he would not answer the phone and often assume he was back in the downward spiral of alcohol use. “They used to worry all the time, if the phones turned off or I wouldn’t answer then Dad must be drinking again. Now they know there is a good reason if I don’t answer the phone.” Not only has Pekka’s relationship with his boys improved but his Mother was able to be in peace when she passed away, after many years of worrying about Pekka, due to his alcoholism. “My Mum went peacefully to her grave knowing that I wasn’t drinking, it was one of her biggest fears.”

Pekka’s relationship with Fresh Start has grown over the years and his ongoing commitment includes constructing firewalls, tiling and even building an ensuite in Dr George O’Neil’s house. Pekka also attends church in Osborne Park and helps out with a homeless feed every Sunday and a bread run on Saturdays.

As a result of the assistance and help Pekka has received through Fresh Start, he is now committed to mentoring those that are struggling with similar addictions. “I like to help young guys that are struggling. I know they will have a relapse, don’t put them down, encourage them to keep going. There’s nothing worse than someone’s having a go at you because you relapsed. You feel bad enough already.”

Pekka’s sobriety has now granted him the chance to follow through with one of his life goals –Travelling around Australia in a camper van with his wife! This sounds amazing Pekka, you deserve the holiday!

Pekka also wishes to thank all the staff at Fresh Start, Go Medical, the clients he has interacted with and especially Dr George O’Neil for helping him turn his life around and assisting him on his path to recovery.

If you would like to help more people like Pekka, please make a donation directly to our account (BSB 066-125. Account Number 1021-4460) with your name and the code “Fresh” for a Tax Deductible receipt to be sent to you, or please donate here.

If you or a loved one are struggling with substance use or addiction, contact us on  (08) 9381 1333 or please send an email to info@freshstart.org.au